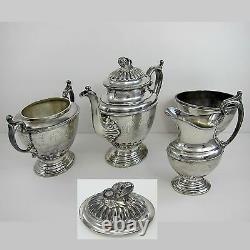 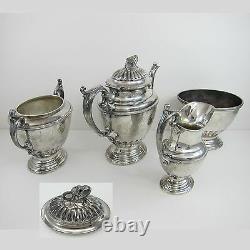 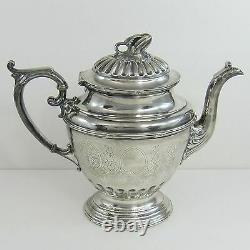 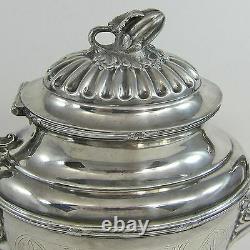 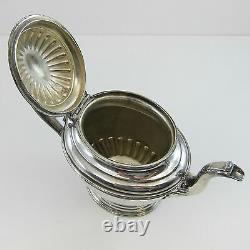 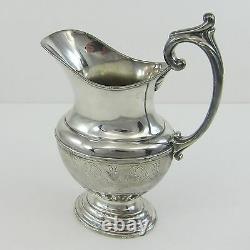 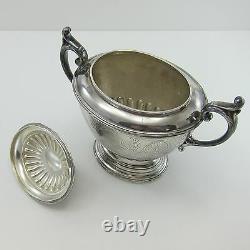 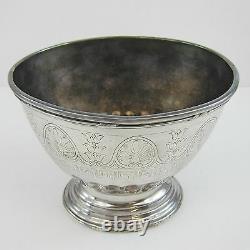 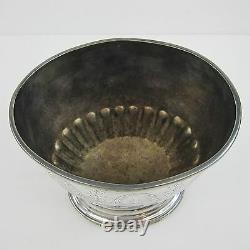 We are pleased to present this antique. Tea or Chocolate Set for your consideration. It is their pattern #1979 which features Tulips, Greek Key, and a Cocoa Bean finial on the Tea or Chocolate Pot.

Four pieces are included as follows. It stands 8 inches high and has a lid attached with a hinge. The inside is clean, while the exterior only has some slight flattening in the area where a monogram would be placed, but too shallow to be described as a dent or bump. It weighs 1 pound 12 ounces.

We rate its condition as very good. It stands 7 inches high and weighs 10 ounces. A few tiny bumps are noted on the inside near the rim, but insignificant. It measures 6-1/4 inches in height and weighs 1 pound 5 ounces.

The lid was misplaced when we first listed this, but it has since been located (we've added the lid to our first two pictures). There are a few scratches in the bottom of the interior, but the metal is in good shape. The exterior has a slight dent (more of a flat area) near the space for a monogram, but shallow and not very noticeable. It measures 4-1/2 inches high and weighs 11 ounces. The interior has a dark patina, but could be polished to give a brighter appearance. The exterior is shiny and dent free. All of the pieces are marked. On their undersides, along with the pattern number. They have been polished and are mostly free of tarnish, but could look even better with a bit more detail work. The combined weight of the set is 4 pounds 6 ounces. This would make a charming set for Tea, Coffee, or Chocolate! The item "REED & BARTON Antique TEA/CHOCOLATE SET Seed Pod COCOA BEAN FINIAL Silverplate" is in sale since Thursday, June 5, 2014.

This item is in the category "Antiques\Silver\Silverplate\Tea/Coffee Pots & Sets". The seller is "gimbler" and is located in El Segundo, California. This item can be shipped worldwide.